From $4,470 | 15 Days / 14 Nights
With over 11,000 kilometres of coastline, Brazil boasts some of the world’s most interesting cities—not to mention stunning tropical beaches. This cruise along the Brazilian coastline exposes this country’s fascinating history, jaw-dropping natural scenery, and vibrant culture. Excursions to landmarks—including the Amazon rainforest—are a bonus.
View Google Map of Region 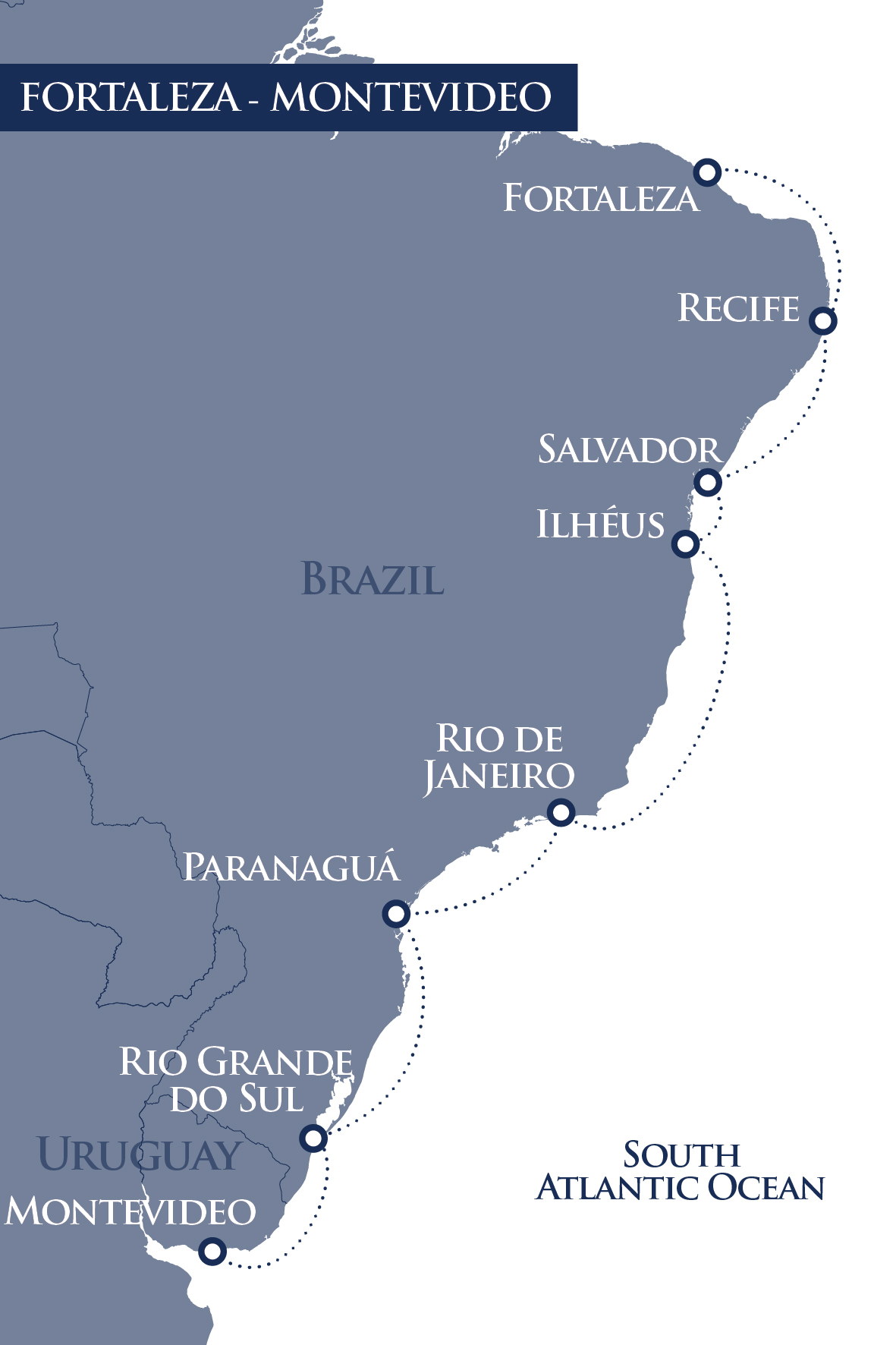 This expedition starts in Fortaleza. Before embarking the ship, experience Centro, the oldest part of town. This is a lively area to explore by day, with busy streets full of small stores and shops. Try some typical Brazilian food at one of the beachside barracas, a type of “rustic” restaurant. If you are interested in history and art, visit the fortress erected by Dutch captain Matias Beck in 1649, as well as Fortaleza’s cathedral, the third-largest church in all of Brazil.

Enjoy the tropical temperatures on deck, or take in one of the informative onboard lectures from our expedition team.

If you like your cities gutsy, gritty, and proud, Recife is the place for you. Several rivers divide this town into a collection of islands which are connected by more than 50 bridges. Hence, Recife’s moniker as the “Brazilian Venice.” In the old center, you will find numerous historical buildings, churches, cathedrals, and busy marketplaces waiting to be explored.

You may also choose to join an excursion to the UNESCO World Heritage Site of Olinda. The Portuguese founded this city in the 16th century, but after a looting by the Dutch in the 18th century, it had to be rebuilt. The houses, baroque churches, convents, and smaller chapels form a remarkable architectural.

Today, birdwatch from the deck, attend a lecture or two, or simply relax with a good book.

Salvador awakens all the senses. Here, you’re invited to take in the sight of gold-encrusted panels on churches, the scents and exotic tastes of African-influenced food, along with the calls of street vendors, the roar of traffic, and the distinctive rhythm of Bahian music.

The city is divided into an upper and lower town connected by the Elevador Lacerda. On the ground floor of this elevator, you’ll discover a well-known marketplace that sells local art. Pelourinho, the historic centre of Salvador, was declared a UNESCO World Heritage Site in 1985, and is an impressive example of Portuguese colonial architecture. Salvador also boasts an astounding number of churches. The city was a significant center for the Atlantic slave trade between the 16th and 18th centuries and today, four out of five of its inhabitants have African roots. African culture pervades Salvador’s music and cuisine.

Today, arrive in Ilhéus, a relaxed town which offers botanical gardens, museums, churches, a sloth rehabilitation center, old sugar mills, cocoa plantations, and truly superb beaches. Join a birdwatching excursion, pay a visit to one of Ilhéus’ many cocoa plantations, set off on a guided tour of the town, go snorkeling, or simply spend the day lounging on a sandy beach.

Join the expedition team for more fascinating lectures on board, or enjoy some rest and relaxation, taking in the sunshine and the view from the deck.

Take in fascinating lectures or relax on deck as the ship makes its way south along Brazil’s fabulous coastline.

Rio de Janeiro is home to Carnival, samba, and Copacabana Beach. Spend the morning out on the on deck to get a first glimpse—and perhaps even see the sunrise over this vast city—as we sail into Guanabara Bay. You won’t soon forget the sight of the 40-metre statue of Christ the Redeemer atop Corcovado Mountain.

Today, explore the city on your own, or join an excursion to one of this city’s many well-known landmarks. Have a refreshing swim at the world-famous Copacabana beach, sip a cocktail in a bar while listening to some traditional samba music, and maybe even enjoy a typical Brazilian dinner of beef or fresh seafood in one of Rio’s world-class restaurants.

Take in fascinating lectures or relax on deck as the ship makes its way south along Brazil’s fabulous coastline.

Wilderness adventures await in Paranaguá! Today, you may choose to board the Serra Verde Express to Morretes, enjoying spectacular views of the Atlantic forest and mountainous terrain. You may also choose to visit the rainforest in Salto Morato, where you’ll be able to birdwatch, soak in crystal-clear streams, and discover impressive waterfalls.

Today, join the expedition team for an onboard lecture or spend the day lounging on deck.

With its jaw-dropping, forest-covered canyons and cascading river valleys, Rio Grande do Sul is a paradise for nature enthusiasts and bird lovers in particular. This southernmost state is also among Brazil’s most culturally distinct, with gaúchos, or cattle herders, and their cowboy culture.

Uruguay’s capital city, Montevideo, is situated at the mouth of the Rio de la Plata. The harbour is very close to the city center. After the farewell dinner on board, you’re invited to explore this town—and enjoy its vibrant nightlife—on your own.

Today, this truly special expedition comes to an end. If you’ve had too much sun and warmth, we recommend staying on the ship for its next expedition—as we sail even further south—to Antarctica!