From $6,100 | 7 Days / 6 Nights
The 300 year old Canal du Midi skirts the sun-drenched shores of the Mediterranean before meandering inland through ancient villages, Roman fortifications and famed vineyards. This canal is defined by its beauty, lined with plane trees and crossed by pretty arched bridges. The Mediterranean weather and pace of life is relaxed and lulls you into unwinding as your luxury Canal du Midi barge meanders gently downstream.
View Google Map of Region 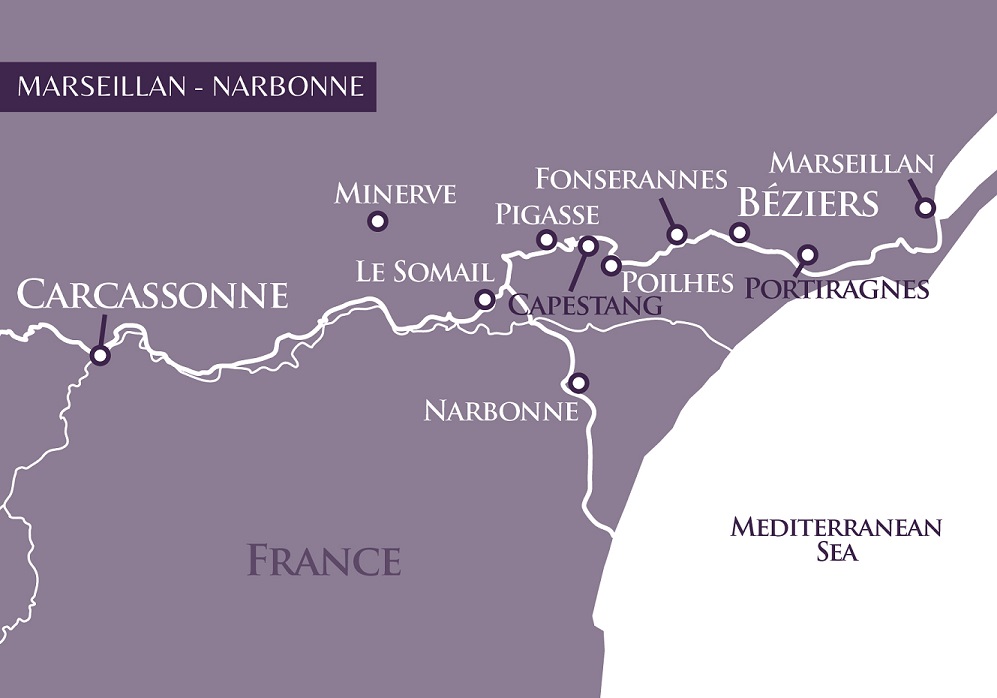 Guests are met at The Clarion Suites in Narbonne and transferred by private chauffeured minibus to Anjodi. Enjoy a chilled Champagne welcome with canapés and the opportunity to meet your crew, followed perhaps by a relaxing stroll around the lovely village of Marseillan, enjoying a view of the oyster beds and home of Noilly Prat vermouth. Dinner on board.

This morning we embark on our cruise along the 330-year-old Canal du Midi through the Bagnas nature reserve, with potential sightings of flamingos, white egrets and other migrating birds, under bridges built from the local black volcanic stone. After lunch on board, we visit Pezenas, the delightful 16th century capital of the Languedoc mostly known for its associations with the French playwright Molière. Dinner on board.

After breakfast, we cruise further along the Canal du Midi to our mooring near Beziers, with plenty of opportunity to walk or cycle along the towpath. After lunch, we enjoy an informative winery tour and tasting at the 14th century Château de Perdiguier, named after King Charles V’s finance minister and famed for its frescoes and Cabernet Sauvignon, Pinot Noir and Chardonnay wines. Dinner on board.

This morning’s excursion is to Narbonne, a Roman Mediterranean capital where the Visigoth monarchs once lived. We tour the Archbishop’s Palace, Cathedral and Via Domitia and explore the indoor market at the hub of this bustling town, where you will have time to shop or simply absorb the vibrant atmosphere. We return to the hotel barge for lunch and cross the aqueduct over the River Orb, before ascending the 7-lock flight of Fonserannes through the unique oval locks to moor above it for the evening. Dinner ashore tonight at L’Ambassade, a Michelin-rated gastronomic restaurant in Beziers.

This morning we continue our cruise, passing through the world’s oldest canal tunnel at Malpas, again with perfect cycling and walking opportunities along the way. Following lunch, we take an excursion to Minerve, the ancient capital of Minervois, which boasts a 12th century Cathar fort surrounded by deep limestone gorges. Besieged by Simon de Montfort in 1210, its hilltop location affords spectacular views and the museum’s fascinating miniature recreation of the bloodthirsty Cathar rebellion completes the intriguing picture. Returning to the barge, there is time to explore Capestang, once the summer retreat of the Bishops of Narbonne, with its magnificent 14th century collegiate church. Dinner on board.

In the morning we embark on our final cruise along the historic Canal du Midi to the delightful village of Le Somail. After lunch, we visit Carcassonne. Dating back to the Gallo Roman era, this is the most complete medieval fortified city in existence today. With its 52 watchtowers, portcullis and extraordinary repertoire of defences, it resisted the many armies that tried to storm this Camelot setting. Captain’s Farewell Dinner on board.

After breakfast, guests are transferred by private chauffeured minibus to their choice of location in Narbonne.

Note: On alternate weeks the cruise will be in the reverse direction.